I stole this recipe from found this recipe on Domestic Sluttery so I can't take any credit for it whatsoever... but I can say that it's the tastiest thing I've ever made all by myself - maybe with a little bit of help from my boyfriend - all he did was chop stuff and look pretty though, so does that count? No, I don't think so either.

• Two small butternut squashes
• 4 tbsp butter
• Half a cup of pine nuts
• About 200g feta cheese
• Handful fresh basil leaves
• 4 tbsp freshly chopped garlic
• Two small red onions
• Half a cup grated parmesan
To make it:
1. Preheat the oven to 180°C / gas mark 6
2. Wash the outsides of the pumpkins and cut them in half lengthways.
3. Scoop out the seeds and fibrous insides. Put about a tablespoon each of chopped garlic and butter into each cavity (use less if you're not a big garlic fan). Pop them in the oven for about an hour, or until the flesh is soft but not so soft that the whole thing collapses – you need the shells to keep their shape.
4. Chop the red onions into small wedges, drizzle with olive oil and chuck them in the oven too. They’ll probably only need half an hour or so.
5. Lightly toast the pine nuts by dry-frying them in a pan on the stove. Make sure you keep them moving in the pan so they don’t burn. (If you don't feel like toasting them, you could really just put them in the mix as they are.)
6. Roughly chop the basil leaves.
7. After an hour or so, whip the pumpkin halves out of the oven and scoop out the flesh of all four, leaving about 1-1.5cm around the edges and on the bottom.
8. Put the pumpkin flesh in a bowl and crumble in the feta cheese, add the pine nuts, chopped basil leaves and onions and roughly mash the whole lot up together.
9. Spoon the mixture evenly back into the four pumpkin halves, grate some Parmesan over the top of each and pop back in the oven for 15 minutes.
10. Serve to guests. Receive praise. Nod and smile graciously.


This was a bit time consuming but majorly easy and oh-so worth it. Did I mention that it's the single best thing I've ever eaten? I hope the Domestic Sluts don't mind me nicking their recipe; it's en hommage, I swear!
Posted by Sarah Appleton at 11:51 No comments: 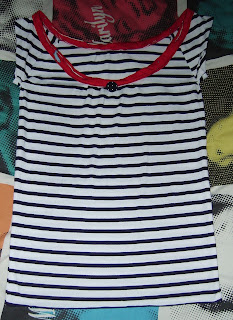 I just made this rather sweet little stripey number for myself... The blue and white jersey fabric was about £3 per metre at John Lewis in the January sales so I just made a really simple cap-sleeved top out of it (using my own pattern) and then I used a scrap of vintage jersey to trim/gather around the neckline and a spare button for decoration. Not the neatest job I've ever done; but pretty good for a few hours' work. This was my first try at using the stretch stitch on my machine too; don't ask me why I never used it before but I'm never going back to my old [incorrect] ways now!

To make the pattern for my top I just traced around the neckline and other dimensions of a shirt I already liked. And the same with the sleeves - I just traced around each half of the sleeve, then taped the halves together. It's pretty easy to adjust the sleeves when you're pinning if the pattern isn't quite perfect. I pin everything together and make sure it's all as neat as it can be before I sew. This fabric was quite slippery to work with - but I have heaps more of it - so when I get around to attempting something else I will at least have lots of room for error!

This t-shirt was made with the support of Jeff Goldblum's chest hair in Jurassic Park!
Posted by Sarah Appleton at 12:58 No comments: