A Dress To Impress

After all the manic embroidering I've been doing lately I decided to take a break and work on some clothing reconstruction. My first project was 'prom' style dress to cute tulip cocktail dress. This is what I did (I'm hesitant to call it a tutorial as my pictures aren't great and my description probably won't be much better), click on the pictures for more detail: 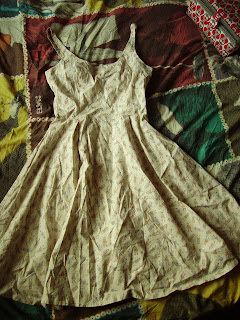 I've had this somewhat boring, frumpy dress lying around for years (originally from New Look); I'd thought about getting rid of it a few times but always held back because I am crazy about the fabric. I dug it out and tried it on this weekend and found that while the full on skirt and the length just didn't float my boat, the top half fit perfectly... and thus a plan began to form! 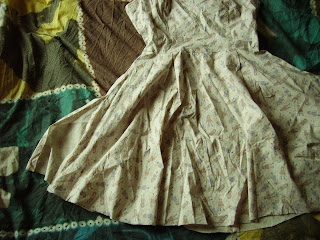 First I figured out how much I wanted to trim off the bottom (5.5") and then undid the side seams to just over half way. 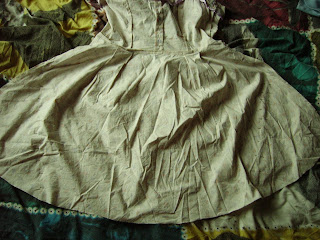 Next I pinned the wrong side of the skirt into the shape I wanted - an angle from the ripped seam to the hem at roughly the same width as the top. I tried it on to make sure it was what I wanted and then sewed it with a straight stitch. Then I hemmed the bottom straight and cut off all the excess. 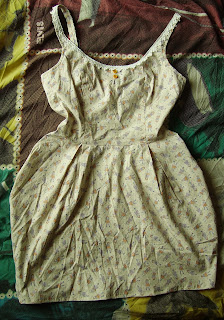 And this is how it turned out! It looks cuter on, hey. I also embellished the neckline with some buttons and crochet-style trim. I made this in a morning - from boring old forgotten dress to something 'new' to be excited about in a few hours! Who doesn't love getting new clothes for free?!

While I made this I listened to The Shirelles, Tegan And Sara and Huggy Bear, yeah!
Posted by Sarah Appleton at 20:38 No comments:

Hi y'all! My sister got a Kindle for her 30th birthday so I decided to make her this completely awesome but redundant bookmark that she'll never use! Why?! To remind her that real books are rad (although I have to say that after seeing her Kindle I think that that's pretty neat too)!

The bookmark is Twilight themed and it's all kinda symbolic and stuff. I don't know why the lion appears to be two shades of orange in this picture because it's definitely not in real life!

The doily was from the lovely Barrett House (as per), and the cross-stitch patterns were all adapted from things I found on the internet or my own design. I covered the back with white felt so that the workings don't come undone and it'll be more hardwearing. I'm chuffed with how it turned out and I hope she loves it!

I made this whilst listening to Johnny Cash and watching Peep Show!

(P.S. The Metamorphosis canvas I blogged about below has now been SOLD! That was pretty fast!)
Posted by Sarah Appleton at 12:24 No comments:

New stuff added to the shop! The aforementioned trinket box and this canvas: 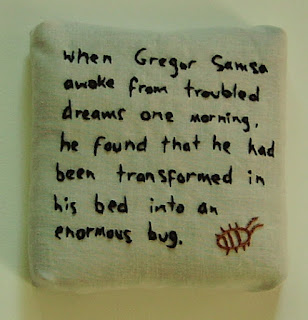 It's a quote from Franz Kafka's The Metamorphosis! I made it while I was watching E! Who doesn't love a bit of juxtaposition eh?!
Posted by Sarah Appleton at 14:02 No comments: