Snikt Snikt!
Today I was inspired by my recent trip to a vintage warehouse to make my own comic book bedside table! So here I am writing something of a tutorial so that everyone out there can so the same, because it's super duper easy.
What you will need: 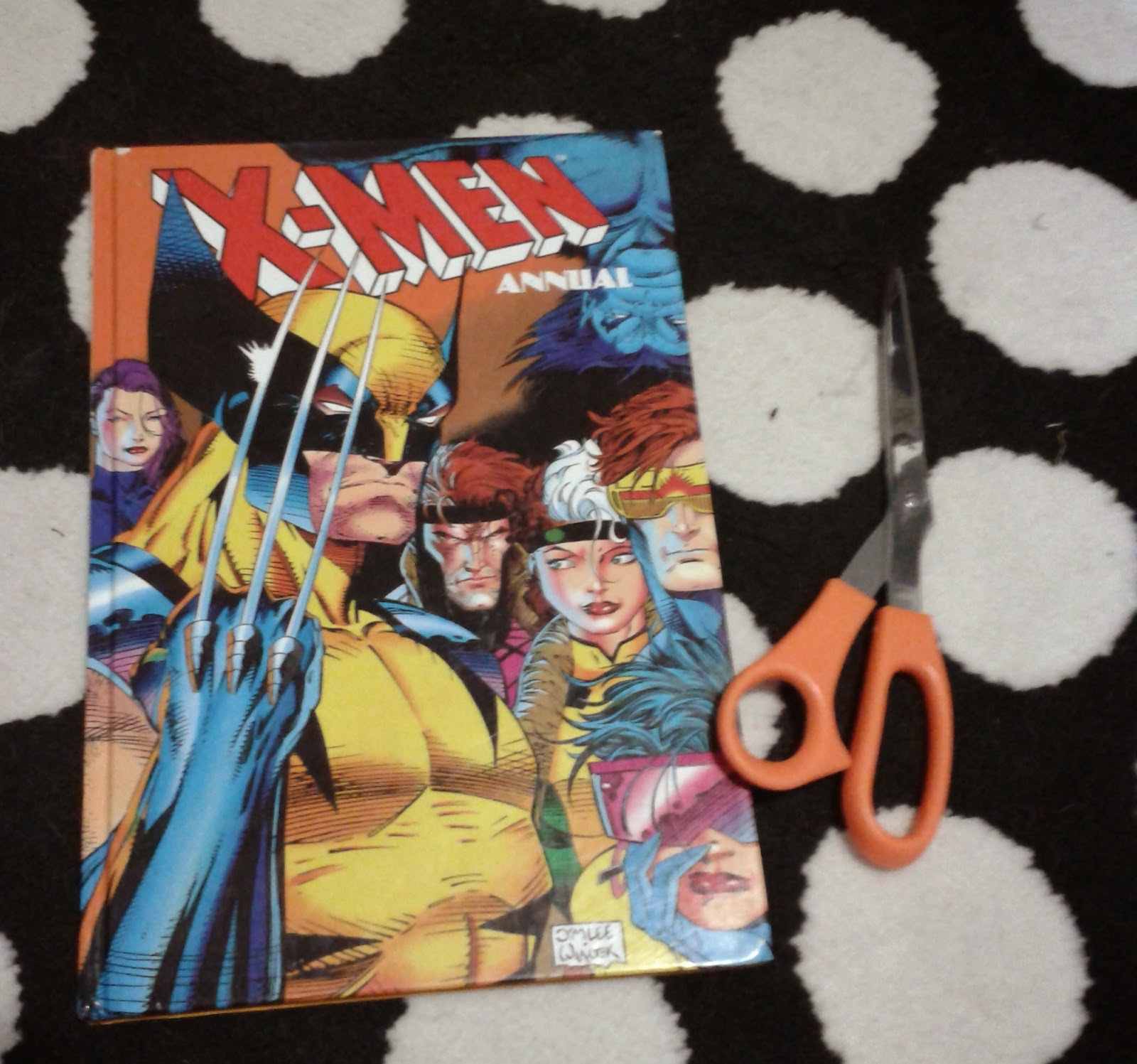 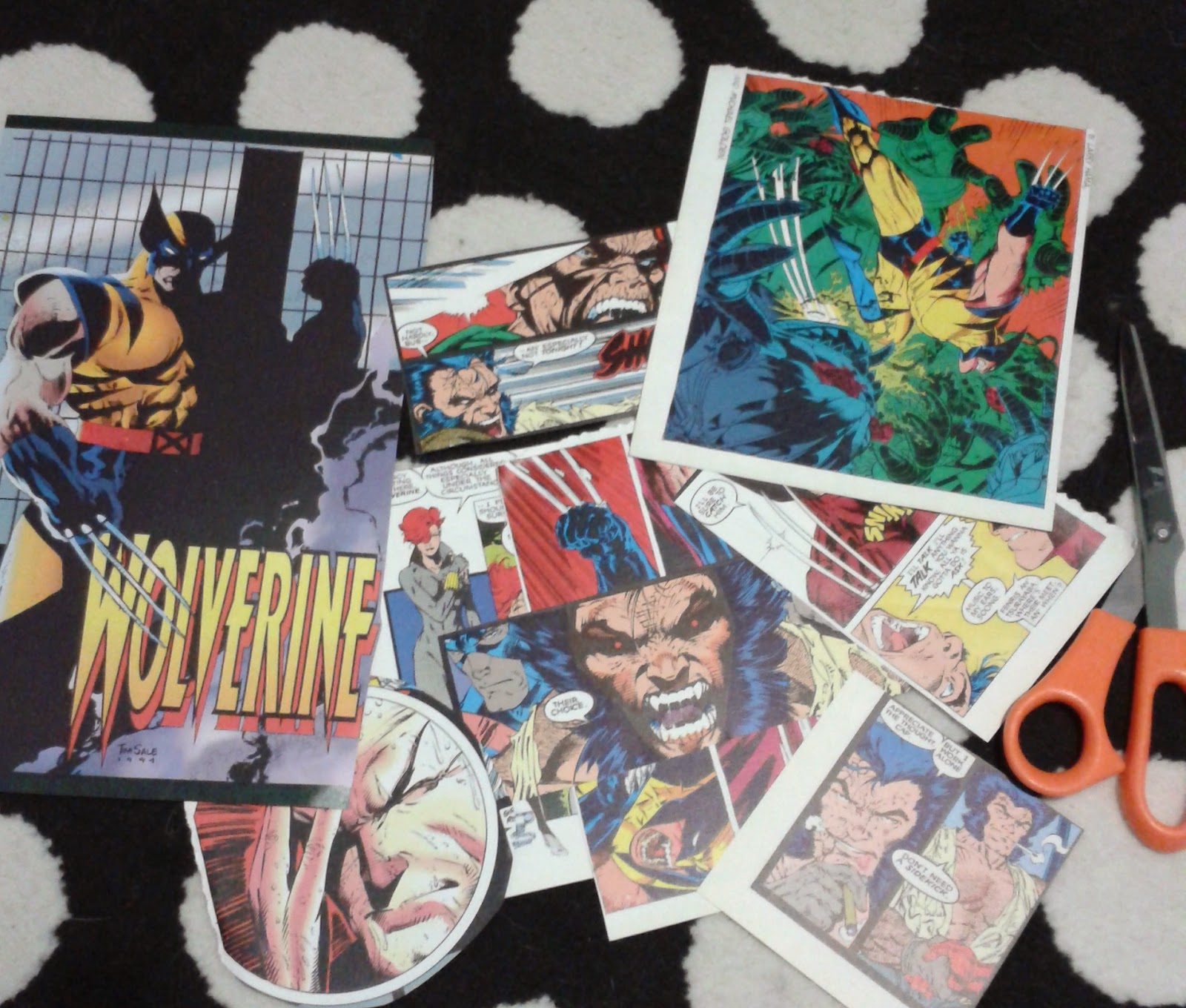 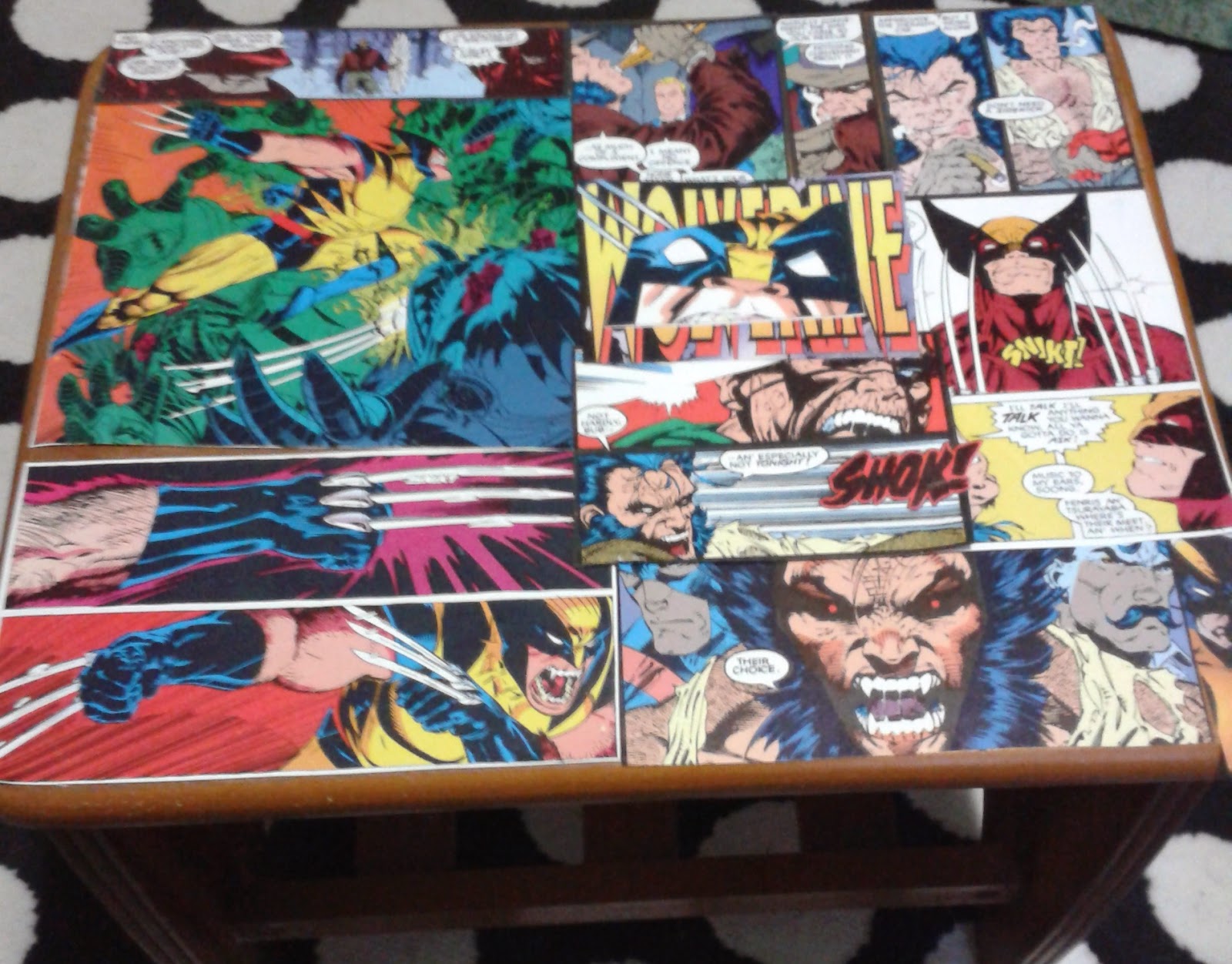 but if you had more time you could do it fancier or even make up a whole new storyline using different sections from each story. I just liked all these pictures of Wolverine looking pretty aggro.
and stick all the pictures down where you want them (it doesn't matter too much if they hang over the edge because you can trim them back with your craft knife at the end). Then you can smewth out any bubbles with the smewther, apply a thin layer of the gluey mix over the top and smewth again to get rid of lumps and excess glue.
Not bad for a super cheap and quick project!
This project was brought to you today by the letters X, Snikt!, Himalaya with Michael Palin and the number #
Posted by Sarah Appleton at 21:30 No comments:

I hardly ever seem to have time to update this blog at the moment what with all my uni work and general Life Stuff piling up, but the intention is always there to do it... anyway since it's currently half term I've found a spare few minutes to write so I thought I'd share this: 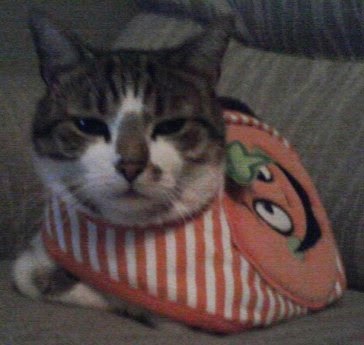 That is my cat James, and recently I've made a couple of brooches in his honour: 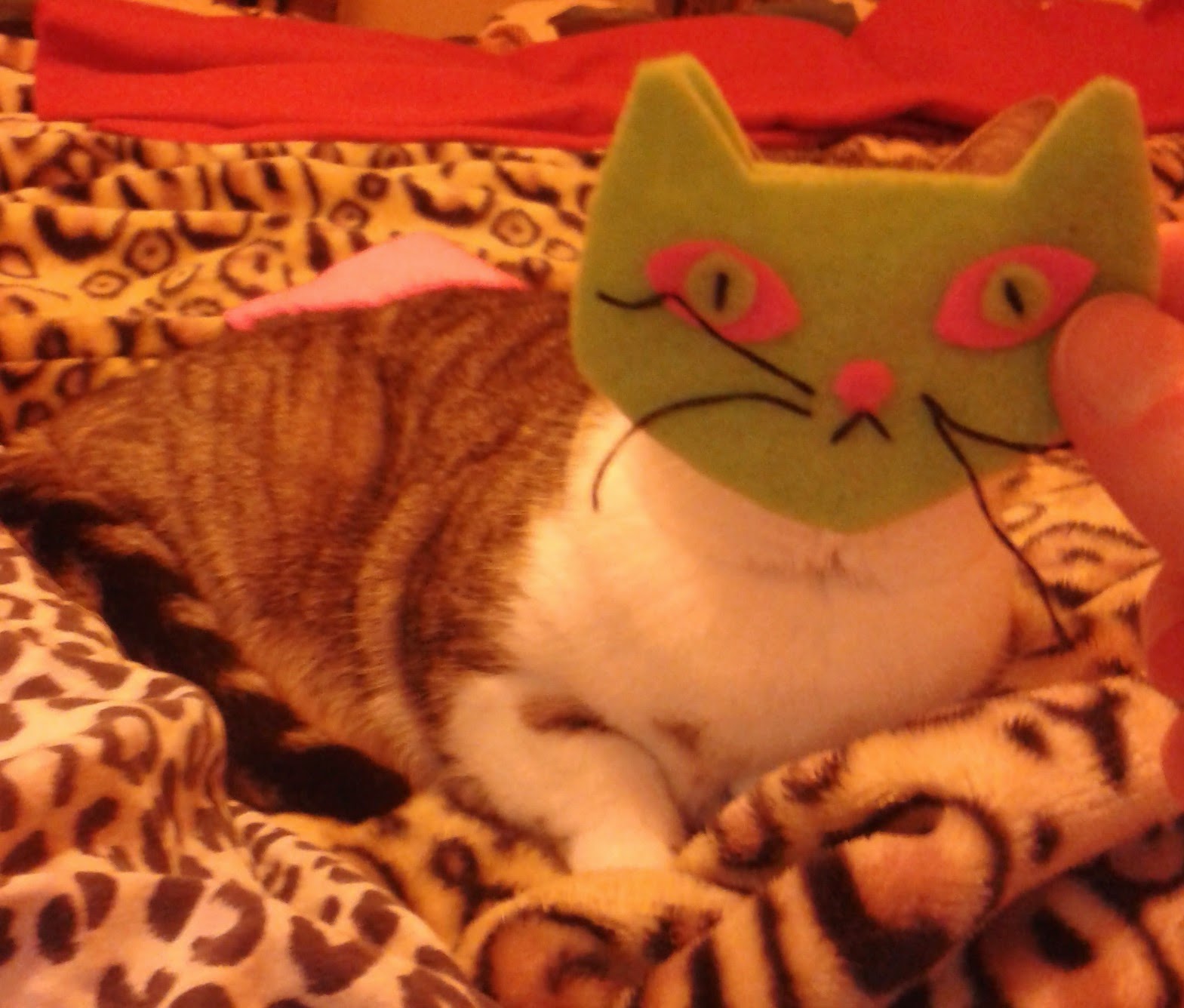 The first was a neon green and pink psychedelic felt effort for my penpal Sally, who looooves pink and green! Here you can see James modelling it like a pro... this was a little before it was finished, but you get the idea. 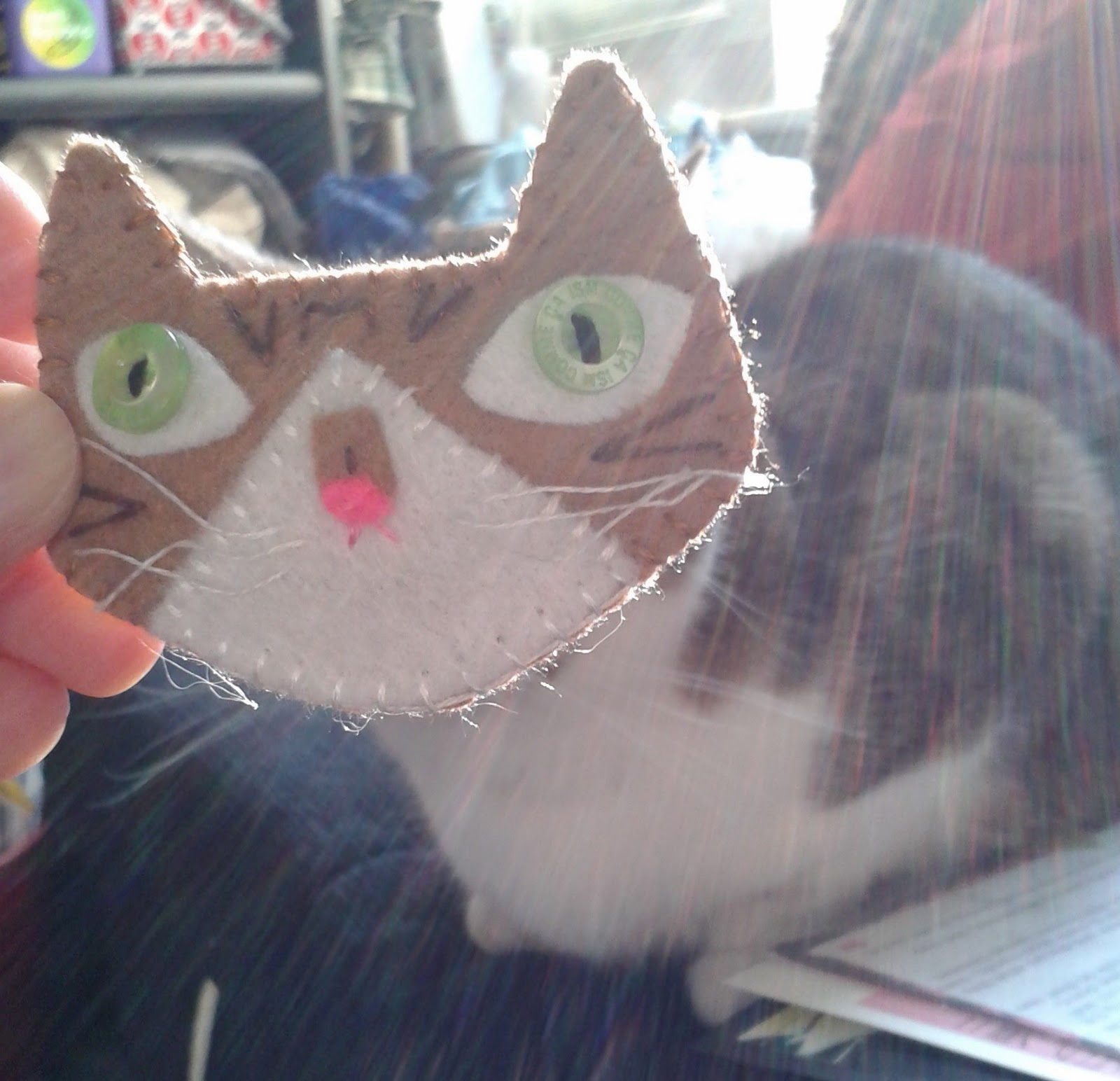 The second one I made in more realistic catty colours for my friend Serina, a Japanese student on my course whose time with us was only scheduled for two terms and last week she headed back home to Japan! I made her this as a leaving present; as you can see I used felt and little button eyes. Sally and Serina both seem to be very pleased with their James faces although I can't say the same for the muse himself! Too baaaad, James.

That's it for now, to see more pictures of James, plus my current works and adventures follow me on Hipstergram

Other things I currently like are: The Great British Sewing Bee, macaroni cheese and Patti Smith
Posted by Sarah Appleton at 23:07 No comments: