Now that my nephew has had his first birthday I can finally write about what I made him; Karma the Chameleon [pattern by Janine Holmes]. This is the most complicated thing I've crocheted to date, although I have been crocheting for a few years now (mostly squares for a never ending blanket). I actually found it a lot less complicated than I thought I would and enjoyed making it which leads me to believe that I should be doing more crocheting than I currently am!
Here it is not camouflaging particularly well with its surroundings: 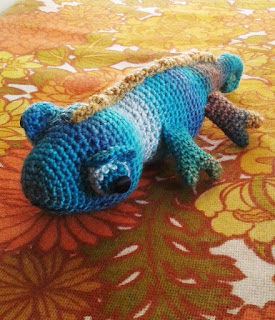 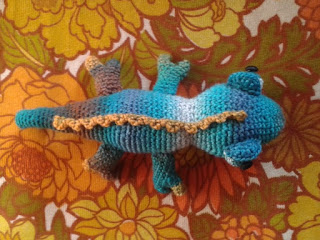 I made a change to the pattern in the sense that I used a self-striping kind of wool instead of using remnants to create my own stripes (mainly because I have no excess yarn stash). Although it's not as colourful as the original I like the way it turned out. The yarn I used is Euro Baby Maypole in Sapphire Blue. Ooooh!

The original pattern [as I mentioned] is by Janine Holmes of Moji Moji Design, and her website is well worth a look as it's full of fun characters like Karma Chameleon. Here's a link; here.
It's also got a page of amazing freeeee patterns, my favourite of which is Freddie Mercury:

How awesome?! There's also other unique, clever characters to make in her Etsy shop. If ALLLL of that wasn't enough for you to go and check out her work... she also has two cats that she regularly posts photos of. So why are you still here?! Go!
Posted by Sarah Appleton at 10:05