In 2015 I was approached by Bournemouth Borough Council to create a bespoke covering for a very important unveiling ceremony honouring Cecil Noble, a hero of the First World War and Victoria Cross recipient. Yesterday I was reunited with the unveiling cloth when I was invited to a second ceremony, this one honouring Charles Riggs who was also awarded a posthumous Victoria Cross. The ceremony was held exactly 100 years after his death on 1st October and as I found out from my Mum, I also had a Great Great Uncle who died in the war on the very same day. 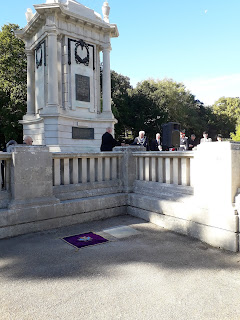 It was lovely to be reunited with such a meaningful piece of work that I haven't seen for so long. I put a lot of thought and energy into making the ceremonial cloth and I worked on it at the same time as finishing a major assignment for university and somehow fitted in a trip to Venice as well?! Well played, Past Me. 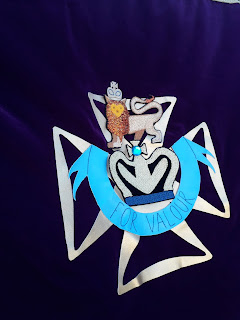 I used hand embroidery, hand sewing, machine sewing, CAD embroidery with velvets, faux leather, braid, tassels and cotton lining to create a multi-textured effect and to put my own signature on this very traditional design. 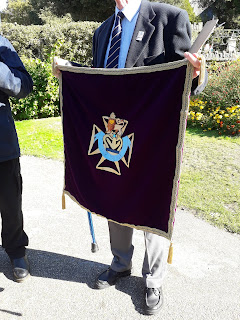 Thanks again to Bournemouth Borough Council for inviting me to the service and for this fabulous commission. I am told that the work will now be placed into their archive, hopefully to be preserved and brought out for future generations!
Posted by Sarah Appleton at 17:10 No comments: