Earlier in the year I applied for the BA Bursary award from the Quilters' Guild of the British Isles and having been chosen as a finalist was invited to display my work as part of the Festival of Quilts in the NEC, Birmingham. Well that happened last week and so I found myself and my creature pals on the road once again!
This was the first time I'd set up an exhibition all by myself (without help from tutors or technicians), which was both liberating and a bit scary. Due to my work being all kinds of little pieces rather than a few big ones, I elected to invest in some bookshelves to display my heads on; the thought being that I then wouldn't have to drill into the wall and also I really wanted to make them into a kind of totem pole effect, reflecting the kind of folky side to my work.
I was quite pleased with the way that this turned out, luckily all the other gals on the bursary stand were really friendly and we all helped each other out a bit. It felt good to make new friends; you rarely get a chance to mingle with people from other universities and see their work while you're a student. The other ladies were:
Petra Baker - who does fabulous things with triangles and leather
Margaret Bacon - who makes clever quilts for dementia patients
Romany Simone Crewe-Henry who invented the Modern Gypsy Caravan style and is also a musician!
Lily Goulding - (who I already knew as she is also from Textiles course at AUB) winner of the BA Bursary (well done Lily)!

and meeeeeee! Here's a photo from the last day of those of us we could round up at the time:
That's me, Petra and Margaret standing in front of Petra's work. Don't we looked chuffed with ourselves?! The FoQ was very tiring but a lot of fun and I talked to a lot of lovely people who said very nice things about my work.Were you one of them? Hello to you!

Here's another view of my stand: 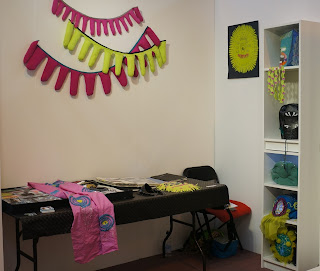 I displayed my tentacle bunting horizontally which I also prefer to the other ways it had been exhibited before (draped down vertically); this was mostly due to having a lot more space on my stand. Along with this I have been working hard over the last few months to create a new piece to add to my collection, the Scaly Black Dragonfish - and here he is in all his glory: 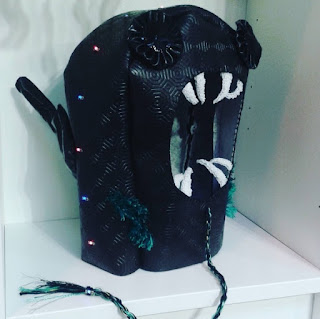 The Dragonfish has bioluminescent qualities, so I made sure to put LED lights all over my dragonfish hood so that he can light up to lure in his prey. I think most people don't realise that I create all the circuitry and programme the flashing light sequences myself for my work; it isn't that hard once you learn the basics. Takes up a lot of batteries though! I used a scaly patterned fabric usually used for table covering to make this piece; the teeth are covered in beads and French knots and his eyes are poofy rosettes. He's one of my favourite pieces from this collection.

That's it! Thanks to the Quilters' Guild for letting me come along, to my fellow graduates for being so fun and nice, to Tony and Irene for being amazing hosts and to all the kind people I met at the Festival. I have a fun idea to enter into the competition categories in the future, so watch this space!
Posted by Sarah Appleton at 10:42