Yesterday I had a day's takeover at the Nutty Parrott Studio at Walford Mill Crafts. The studio is the shared space of Caroline Parrott and Wendy Nutt, who are both lovely and extremely talented ladies!
During my takeover, I (wo)manned the shop for them and was able to use the space to create some of my own work too. Here's me outside the studio:
And here's the bug brooches that I was working on whilst I was there:
These will be available to buy soon from my Etsy store, or directly from me. They are designed from one of my original illustrative drawings, then laser cut onto specially chosen materials (wood and acrylic) in a fabulous colour pallet, then the bug brooches are hand finished with a hand painted, handmade bead and a handmade tassel all made by me! I also 'embroider' them a bit with patterns through holes in their bodies. These are really fun, oversized statement jewellery, not intended for the faint of heart!
But back to Nutty Parrott - it's a really great space to work in; calm and decorated by Caroline and Wendy with inspiring bits and bobs and all their gorgeous work. I had a few visitors who came to browse and chat, so that was nice. I'm scheduled for some more shifts there, which I will look forward to very much!

In other news I have also come across a very fabulous picture of me from Mardi Gras last weekend in which you can see my full outfit including the elusive feathered leg cuffs!
Yay!
Posted by Sarah Appleton at 20:53 No comments:

My time at the New Carnival Company has come to an end. I'm now back home in Dorset, feeling a little discombobulated after the Mardi Gras yesterday but very grateful and happy to have been involved in this incredible event!
On Friday we focussed on finishing Gina's elephant. When I arrived in the morning she had already made him tusks and eyelids:
I started the day by making heck loads of ruffles from sequinned fabric:
We also had a make-up artist come in and test out face painting ideas on us for the next day. It was nice to have a mini pamper after we'd been working such long hours! Then Gina and I draped a headdress for him which was upcycled from a duvet cover: 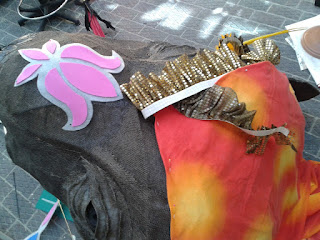 And I used my sewing skills to sew that and the ruffles together while Gina finished the details and decorated him beautifully: 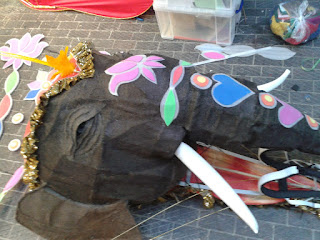 Later I finished a few little touches for my peacock costume (leg cuffs and final headdress adjustments) and was very surprised to be presented with a card and beautiful elephant necklace from the NCC staff: 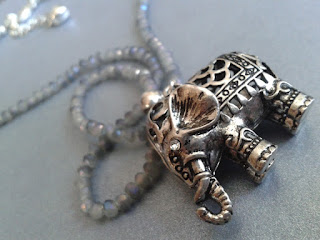 I was even more surprised that they sang the happy birthday song since it wasn't my birthday! Heh heh! They did a lovely presentation and said very kind words and I'm very pleased and grateful that I'll have a treasure to always remember my time there.
Later we checked our to-do list for anything we had missed (nothing):
So we had a little celebration with wine and a disco! We were joined by Zach who is a carnival regular and also currently doing some work with the NCC.
The next morning was the big day that we'd all been working so hard towards! When I arrived in the morning Gina had been at it again and created the most beautiful eyes for Ellie: 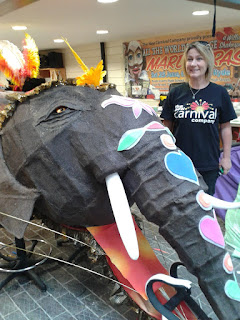 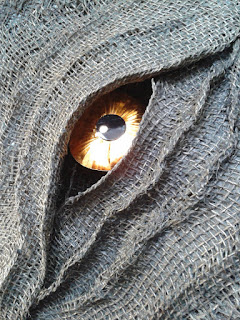 These were only made from a coppery foil and sequins, but what an incredible effect that totally brought the elephant to life! Next we loaded up the truck with all the costumes that we needed, along with tables, chairs, tools, equipment, gazebos and decorations for the site at Ryde school. Then Gina, Zach and I went in the carnival truck to set up, along with all the other staff and volunteers: 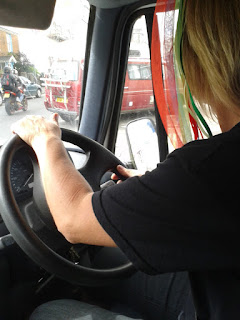 When we arrived we had to prepare the site for everyone to arrive. This is the site beforehand, basically just a fabulous field with amazing views: 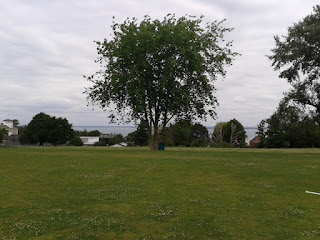 It was also the day of the Round the Island Race and we could see some of the boats sailing past as we worked.
We were split up into teams and my first team job was to erect the VIP tent. This was no mean feat as we were faced with a pile of poles that all looked very similar, but no instructions! The poles were numbered so eventually we figured it out with logic and process of elimination:
The next job was to unpack all the costumes from the big truck and lay them out ready for dressing up! Here's some of them ready to go!
After that it was lunch time and I must say the NCC's Alison put on a lovely feast for us, thanks Alison! 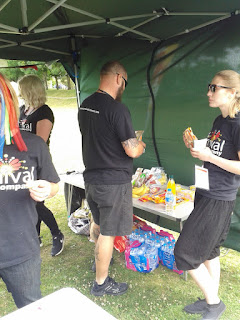 I don't really have any more photos of the event unfortunately, as I had to put my belongings in a safe place for later on... but I do have a photo of how my outfit turned out:
This was more or less it minus a few details. There's more great pics over at the Island Echo website, including one of Mary in the finished elephant and another of me in the distance accompanying the peachicks from Lanesend School! They didn't know I'd be walking with them until they turned up on the day and they were all very chuffed and excited and kept asking me if the feathers were real and how much they weighed and that sort of thing. These photos (and video) are great because if you've never been it really shows you the scale of the whole event, how many people from all walks of life took part and came to watch and all the costumes, colours, textures, excitement and fabulousness of it all.
I also had my face painted like a peacock princess by Lisa of the face painting team: 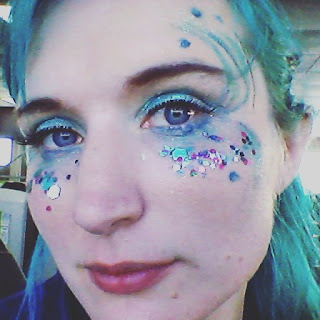 This photo was taken after the event so some of the make up has worn off including my blue lips, but you get the general gist, right? I loved it and felt very glam!
The actual parade part was very fun, I tried to put in lots of energy and dance moves and keep people entertained, casting a voodoo princess peacock spell on the crowd, letting people take pictures of me if they wanted to and waving to all the doggies and kids. Afterwards it was a quick de-robe, then loading all the costumes back into the big truck. Here's Coral and me inside the big truck:
Then after loading all the gear back into Carnival HQ it was a quick goodbye and off I popped onto a ferry and home! I've had the most incredible time, been burnt (hotel incident with kettle), bitten (bugs) and bruised (clumsy) and am still exhausted and drained, but it was so worth it for everything I learnt and the great new friends I've made. If you'd asked me a couple of weeks ago whether I could design and make my own costume, dance in a parade and help other people do those things then I probably would have had doubts... but as it turns out I totally can do those things! Another big thank you to the New Carnival Company for having me and making me feel part of the team and an extra big thank you to Gina who took me under her wing, showed me the way of the carnival and was a great teacher, always taking the time to explain how and why to do things, even when we were sooo busy! How, where and when I'll use the skills I've learnt remains to be seen but as I'll be teaching quite a lot over the summer I'm sure I'll put my new knowledge to good use!

To find out more about The New Carnival Company you can go to their website or Facebook.
Posted by Sarah Appleton at 19:17 No comments: