This year I was asked by my sister to create a costume for my nephew to wear on World Book Day. He's 3 years old and obsessed with Mary Poppins (as I was and still am!), so a Bert costume it was! Or more specifically, Bert in the 'Jolly Holiday' scene. If you haven't seen the original (or need a reminder) you can check it out here! It's basically a classic casual men's Edwardian seaside holiday lurk with striped blazer, bow tie and straw boater hat.

So for this costume I used this Kwik Sew pattern and super-simplified it (e.g. left off all the pockets and unnecessary bits) and customised my own stripey fabric. First, I cut out all the pattern pieces from plain white cotton, then I used red, yellow and orange ribbon in different widths to make each individual stripe, pinning them into place first and then sewing them down with the corresponding colour thread. 🙈 If you are reading this with the intention of making this yourself here's a tip - you need like 5 metres of red and yellow and about 8 - 10 of orange... 2 trips to Fabric Land later I wished I'd known this beforehand!😅 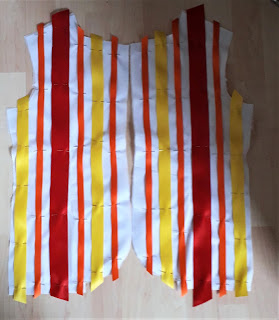 Once that was done I sewed the whole thing together including a contrasting blue half-lining, which I included to make it easier to get in and out of the sleeves. The finishing touches were a faux breast pocket with faux handkerchief and of course the signature blue tie! I whipped that up out of a bright blue scuba / neoprene style fabric, which works really well for that purpose because it holds it's shape so beautifully and has a kind of cartoon / hyper 3D / sculpted fondant cake icing look. You know I love me some neoprene! 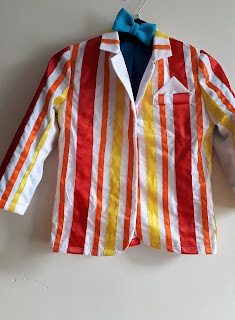 I then handed over to my sister, who gave it a jolly good iron, added some buttons, a shirt and hat and inserted a child! Here's the finished lurk:
Doesn't he look amazing?! I was so happy with the end result, but I was even happier that he looks so great in it and that he was willing to wear it at all! It just made the whole thing so fulfilling! I can't wait to see how we outdo this one next year!

Update: Jamie won the best costume award at his nursery! What a fantastic surprise; I didn't even know there was such a thing and I so rarely win anything that this is a great honour for me! Well done Jamie! 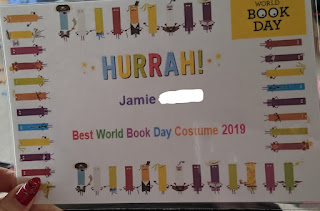 PS is anyone else dying to know the backstory between Bert and Mary?! C'mon Disney, we need a prequel now!
Posted by Sarah Appleton at 11:14